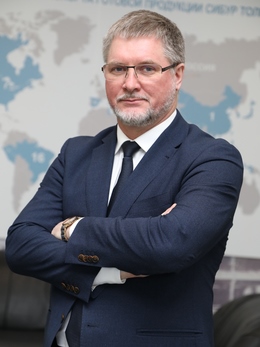 In 1994, he graduated from the Moscow Institute of Fine Chemical Technology n.a. M.V. Lomonosov.

In 2010, he studied at the Stockholm School of Economics under the program "Management".

From 2009 to 2012, in Sintez-Kauchuk OJSC (Sterlitamak, Republic of Bashkortostan), he successively held the positions of technical director - chief engineer, and general director of the enterprise.

Since 2015 – General Director, JSC Togliattisintez / LLC Togliattikauchuk
About Tolyattikauchuk
History
Management
Integrated management system
Products
Main Products
Full Product Catalog
Technical Data Sheet
Contacts
© 2006—2022 PJSC TATNEFT. Legal Info | Sites of enterprises Tatneft Group
We use cookie files to personalize and enhance the convenience of using the website.
You are kindly requested to read our Confidentiality Policy to get more information.
Using our website, you agree to the use of cookies by our site.